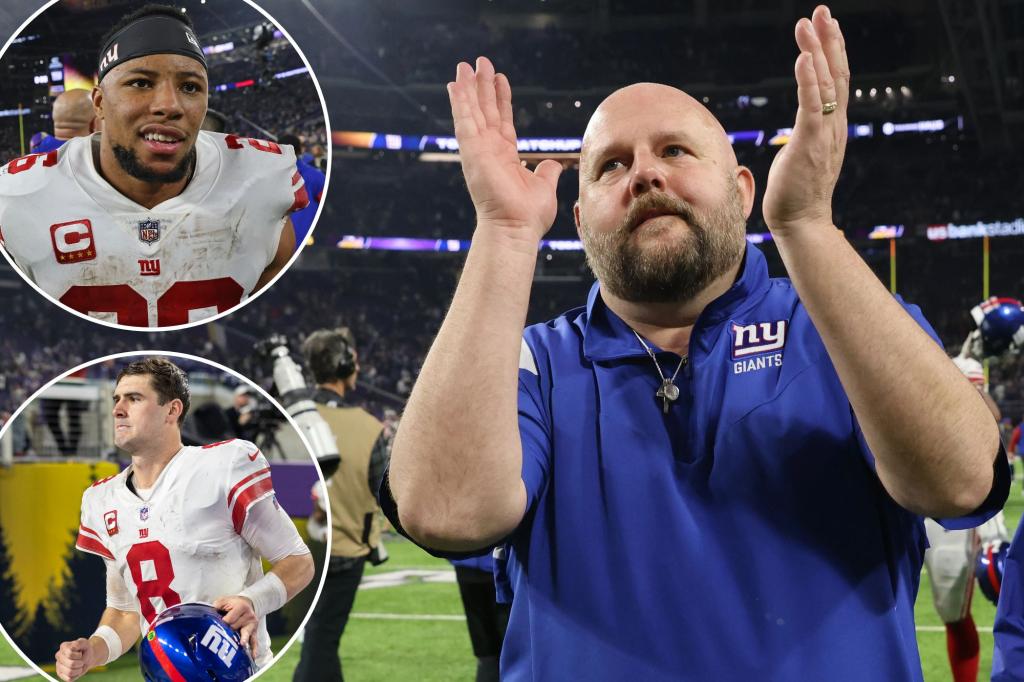 MINNEAPOLIS — The Super Bowl is on the line now as an achievable and sincere goal. If you’re a Giants fan, nothing has ever sounded so completely crazy and perfectly reasonable at the same time.

It’s crazy because this franchise is supposed to be in the early hours of a rebuild with a rookie head coach and a roster seemingly bumpier than the Cross Bronx Expressway.

It’s reasonable because the Giants just beat a 13-4 division champion in their own building in the first round of the playoffs, setting up a rematch with the top-seeded Eagles in Philadelphia, where the home team struggled to beat the Giants. us last week.

“We’re back,” Giants co-owner John Mara told The Post amid a jubilant US Bank Stadium locker room after their sixth seed. defeated the third-seeded Vikings, 31-24.

Mara signified that his franchise is finally back in business after notching its first postseason victory since beating the Patriots in the Super Bowl, again, 11 years ago. “It felt like 1964 to [1980] all over again,” the owner said of the drought that was so hard on his old Wellington.

Mara was reminded that he had told The Post in 2021 that he saw Daniel Jones as a future Super Bowl winner before being asked if he could see this rising quarterback and this rising team really moving toward the. Great game.

“We are worried about Philadelphia, that is going to be a big challenge for us,” he responded. “I’m not going to make any predictions beyond that, believe me.”

But if the Giants are indeed “back,” doesn’t that mean players think they can go all the way?

That’s right, who knows? The Eagles are absolutely expected to send Jones & Co. home for the winter. But a lot of things that are expected in the NFL, like the Giants going 5-12 this year, never happen. Ask the Vikings about that while they’re busy packing up their gear and planning their getaways to a distant golf course or beach.

The Giants are getting better and better, a prerequisite for a deep postseason. And Jones suddenly looks like a runaway freight train in the sport’s most critical position, a 6-foot-5 athlete who can beat you in a dozen different ways.

So once again, who knows? Back in the day, nobody thought the 2007 Giants were going to go to the Super Bowl, even after they did play the Patriots 15-0 in a tie late in the regular season.

But they just kept getting better and better, eventually knocking out the Cowboys 13-3 at home in the divisional round. At Texas Stadium that day, hours after Peyton Manning and the 13-3 defending champion Colts were eliminated from the playoffs, Manning matriarch Olivia had this to say to a pair of scribes:

“I have a heavy heart for Peyton, but I’m proud of Eli.”

The same Eli Manning who had been pummeled by critics in his first three years as much as Jones would be pummeled in his first three. Archie Manning would later say that he did not know who would leave the New York market first, his son or Tom Coughlin.

Together, Eli and Coughlin stunned the world and the Patriots 18-0 in the Super Bowl. Fifteen years later, is the Giants of Jones and Saquon Barkley and Brian Daboll, the league’s Rookie of the Year, likely to write an even wilder story than that?

No, it’s not. And yet, right after Daboll declared that playoff experience is overrated, the Giants agreed with him. This team is gaining confidence from possession and represents a credible threat to the Eagles.

“The ultimate goal feels more within reach now,” defensive tackle Leonard Williams said. “I think we show each other that it’s really possible, if we just play together to keep driving this forward.”

Maybe the Giants can survive this manhood challenge in Philly. They might get a lucky break in the form of a Dallas/Tampa Bay win over San Francisco. Or maybe the Giants can beat the 49ers on the road in a violent NFC title game, just like they did 11 years ago.

For now, you have to take them seriously as contenders to get to the Super Bowl. And that’s about as unlikely a statement as has been made about this franchise in nearly a century of soccer.

“I think as long as we stay together…the sky’s the limit,” said Darius Slayton.

“It’s so nice to be back and playing meaningful games,” Mara said, her voice hoarse from the shouting, especially on that Lawrence penalty. “And to see our fans so excited, that’s the best thing for me.”

It turned out that the best thing for everyone in blue was the belief that inspired this surprise. The Giants didn’t just hold onto their lead late on. They held on to the possibility that they could advance to the biggest stage in sports.