How Russia’s war is impacting the global environmental agenda 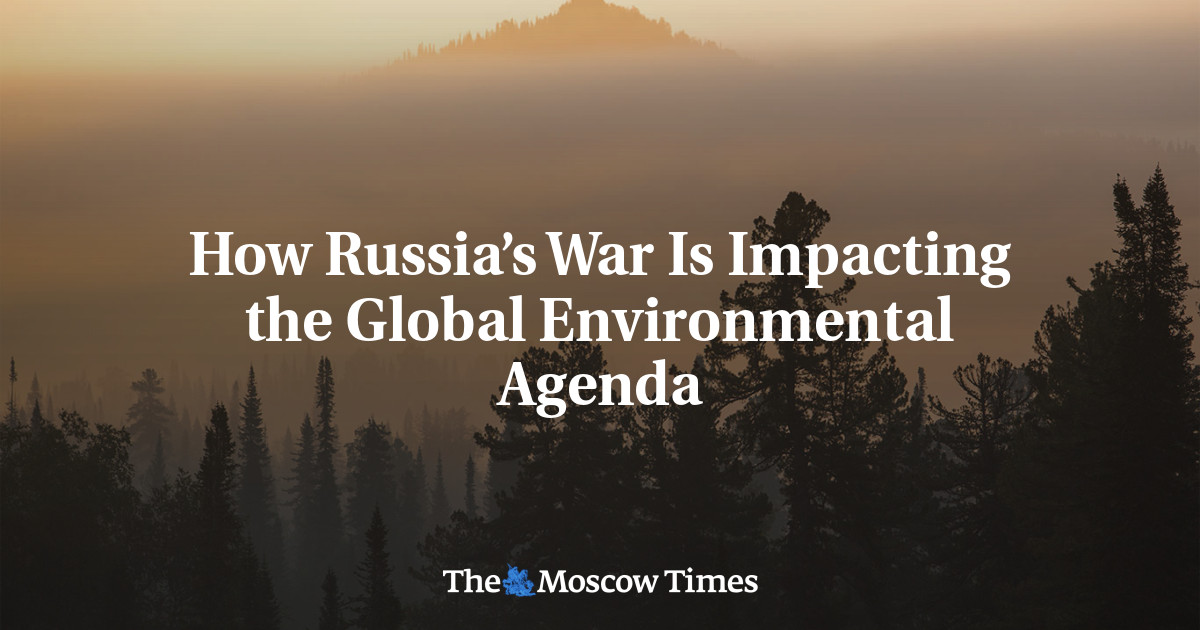 The impact of the Russian invasion of Ukraine on biodiversity and the climate was not part of the official agenda at two major recent UN environmental conferences, but on the sidelines of both, the consequences of the war figured prominently. These discussions demonstrated that, far from overshadowing the global environmental agenda, the war in Ukraine has, in fact, created new challenges and is forcing a reassessment of the transition to renewable energy.

In the months after the invasion, it appeared that climate issues were disappearing from the agenda and that funding for emission reduction programs would be cut (mainly in developing countries), partly due to a sharp increase in spending on defense by Western countries, what you have slowdown in decarbonization.

However, recent summits have shown that these fears were largely exaggerated. there is an increase speaking of the interconnectivity between the war in Ukraine, climate change, energy and food security problems, the destruction of ecosystems and the reduction of biodiversity.

It can be said that some consequences of the war have impacted the climate agenda. First, global energy markets are being transformed: many countries have switched their oil and gas suppliers and are hastily building LNG infrastructure, reopening coal-fired power plants, considering extending the life of nuclear plants (or build new ones), and invest in new fossil fuel projects.

Meanwhile, medium and long-term trends remain unchanged: the importance and share of renewable energy sources continues to grow. Investment in this sector is increasing, as is its role in providing energy security, and the technologies are becoming cheaper and more efficient.

Second, the war is reshaping world markets for food and fertilizer. Multiple countries are now planning expand the production of cereals and the supply of raw materials for the production of fertilizers, which represents a threat to ecosystems and biodiversity.

Third, reductions in metal supplies from Ukraine, together with partial sanctions and limits on supplies from Russia, are transformation world metallurgy. Some of the changes affect the extraction of metals needed for global decarbonization and energy transition, including steel, aluminum, lithium, nickel, copper, and rare earth metals.

Sanctions and trade barriers have cast doubt on Russia’s climate policies, there is a discernible appetite for rowing back environmental legislation and to relax various other environmental rules and regulations.

Despite this, the Russian government continues to pass climate laws and rules on carbon regulation, and new projects are being launched, such as a experiment with becoming carbon neutral by the end of 2025 on the island of Sakhalin in Russia’s Far East.

Companies meet their emission reduction targets and ESG (environmental, social and governance) measures. Events dedicated to climate, decarbonization and sustainable development are still held regularly, although the international focus has displaced to the experience of Asia, the Middle East and the other BRICS nations.

At the COP27 UN climate conference in Egypt, representatives of Russian companies, most notably the Rosatom atomic energy agency, also spoke out against neocolonialism alongside representatives of the Global South. Using rhetoric about building a multipolar world, the Russian authorities tried to woo non-Western countries to their side, sometimes using the carrot of technological collaboration on green issues.

This amounts to a paradoxical situation, in which, on the one hand, Russia is increasingly prone to anti-Western rhetoric and openly advocates the need for a “sovereign green agenda”, while, on the other hand, condemnation the exclusion of individual countries from the global dialogue on climate and calling for the lifting of sanctions and trade restrictions on low-carbon technologies and goods necessary for the energy transition.

Russia continues to stress the important role its ecosystems play in solving climate and biodiversity problems, an emphasis routinely criticized by environmental experts who accuse Moscow of being reluctant to reduce its greenhouse gas emissions in other sectors or to develop its own renewable energy industry. .

It is also worth noting that at COP27 Russia blocked mention of reducing fossil fuels or increasing the share of renewables in the final communiqué, claiming that its position stemmed from its support for developing countries.

Russia continues to support “technological neutrality,” arguing that each country should have the right to decide for itself how best to cut emissions. On Moscow’s part, this seems to mainly involve developing gas and nuclear power and relying on its vast forests to absorb its emissions.

The recent UN summits show that Russia remains interested in green diplomacy, something it has been working on since 2014. Following the annexation of Crimea and the resulting sanctions, the country’s representatives suddenly showed much more interest in the green aspects. of international collaboration, seeing them as an opportunity to continue the dialogue and at the same time access financing and new technologies.

Now, however, Russia’s problems in accessing green technologies and international financing it will only grow. Any new partner Moscow finds is likely to be more interested in gaining preferential access to Russia’s natural resources than in high-tech collaboration on green development.

The Institute of Economic Forecasting, part of the Russian Academy of Sciences, predict that Russia’s potential to reduce greenhouse gas emissions will have been nearly halved by 2050, mainly due to technological limitations. If true, that would not necessarily prevent Russia from reaching carbon neutrality by 2060, which could happen as a result of the economic downturn.

A drop in GDP, a decline in Russia’s share of the global economy, and depopulation could significantly reduce Russia’s greenhouse gas emissions. In fact, we may see a repeat of the 1990s, when Russian emissions fell by more than 30%, more than Moscow’s required amount under the Kyoto Protocol, due to a sharp drop in industrial production following the collapse of the Soviet Union. But that can hardly be considered genuine decarbonization.

This article was originally published by The Carnegie Endowment for International Peace.

Opinions expressed in opinion pieces do not necessarily reflect the position of The Moscow Times.