Featured New Books on Climate and the Environment 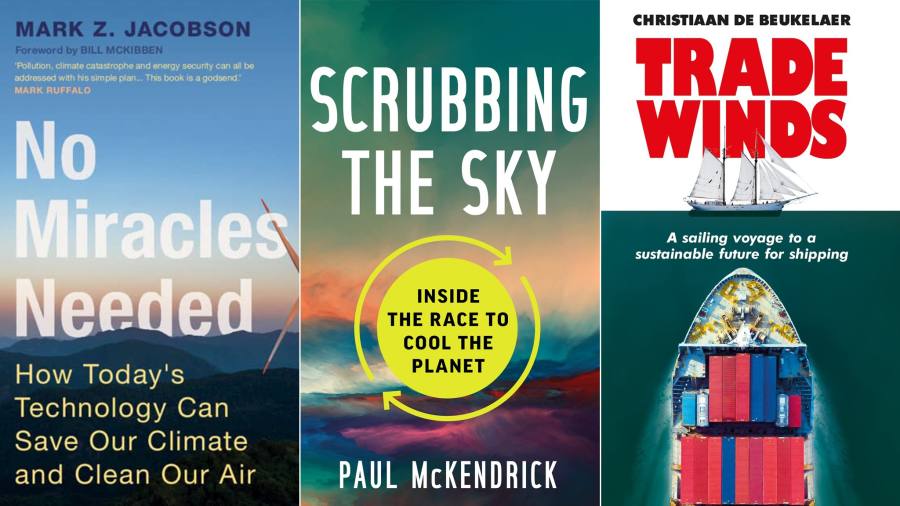 The new year has brought a batch of books packed with insights into the growing debate about how best to tackle climate change. Its authors want to change your mind about everything from the power of renewable energy to the need for net zero emissions policies and machines that can suck carbon dioxide out of the air. For a change of pace, there’s a softer story of what a voyage on a 100-year-old sailing ship can tell us about the future of shipping.

The weightiest paper comes from Mark Z Jacobson, a Stanford University professor who has spent years arguing that wind, hydro and solar power can provide 100 percent of the world’s energy. Climate activists from Hollywood to Washington have seized on his work, which has also drawn fire from critics who question the viability of 100 percent renewable energy.

Jacobson addresses all sides in no miracles needed: How today’s technology can save our climate and clean our air (Cambridge University Press, £11.99). Much of the book explains in meticulous—and I mean meticulous—detail how each of the wind, hydro, and solar technologies works, and why they are necessary to eliminate air pollution, global warming, and energy insecurity.

The most contentious sections tackle detractors who say 100 percent renewables would risk blackouts on windless or cloudy days, or require too much land to spread on wind and solar farms, or cost too many jobs. .

Jacobson responds to each charge, adding that the great advantage of renewable energy is that it is better than all the alternatives. Natural gas still causes global warming. Nuclear power is expensive. Biofuels cause air pollution. And so. He also disdains direct carbon capture from the air, a relatively new technology that extracts carbon dioxide from the air.

This is unlikely to bother Paul McKendrick, a Canadian writer who makes clear his admiration for direct aerial capture in scrubbing the sky: In the race to cool the planet (Figure 1, C$28.95). This is the story of the scientists, philanthropists and investors who have spent more than 20 years bringing direct air capture to life, which uses chemicals to extract CO₂ from the air that is then captured for storage underground or use elsewhere.

It is a timely book. Scientists say carbon removal measures will likely be needed to prevent more damaging global temperatures. Companies like Microsoft and Swiss Re have begun investing millions of dollars in direct air capture startups.

But, as McKendrick explains, none of this seemed likely in 1992, when American scientists like Klaus Lackner first came up with the germ of the idea of ​​direct air capture. Bill Gates, Elon Musk and Richard Branson also appear in the history of a technology that we are likely to hear a lot more about.

Direct air capture also gets a mention in UK journalist Ross Clark’s anti-net zero polemic, no zero: How an Irrational Goal Will Impoverish You, Help China (And Not Even Save the Planet) (Forum, £20). Clark’s argument, which will be well known to readers of his columns in British newspapers, is that the UK was crazy to make a legally binding promise to reduce its emissions to net zero by 2050.

He says there should have been more debate about a policy fueled by alarmist “hyperbole” that could do “great damage to our economy” while the biggest carbon polluters like China got off the hook.

So familiar to students by now of what’s known as “climate inactivism,” a new breed of skepticism that no longer rejects climate science outright, but questions the scope and pace of action required.

Clark finds himself on more interesting ground when he complains that the UK’s net zero emissions target is impractical in a country with a “hopelessly inadequate” electric car charging network; poor hydrogen infrastructure; insufficient energy storage and other deficiencies.

Frustrated net zero advocates make similar arguments. But very few agree with the concept behind Clark’s thesis: even if the drawbacks of global warming outweigh any benefits, “nothing lies ahead that is beyond our ability to cope.” Trusting that cheery prediction is, of course, a luxury most of the world can’t afford.

Finally, Melbourne-based academic Christiaan De Beukelaer has written a book about the kinder yet adventurous weather, Trade winds: A journey towards a sustainable future for shipping (Manchester University Press, £20/$29.95).

In February 2020, De Beukelaer boarded the Avontuur, one of the world’s largest cargo sailing ships, for what was supposed to be three weeks of fieldwork on the prospects of reviving emission-free shipping. Three weeks turned into five months when De Beukelaer and her 14 crewmates were thrown overboard by the Covid-19 pandemic.

The result was what he calls, with a certain euphemism, “a confrontational journey.” The ups and downs of life on board make for a lively travel story. But woven in is an interesting story of efforts to decarbonise the global shipping industry, and a compelling assessment of the role sailing cargo ships could play.

clark is a business columnist for FT