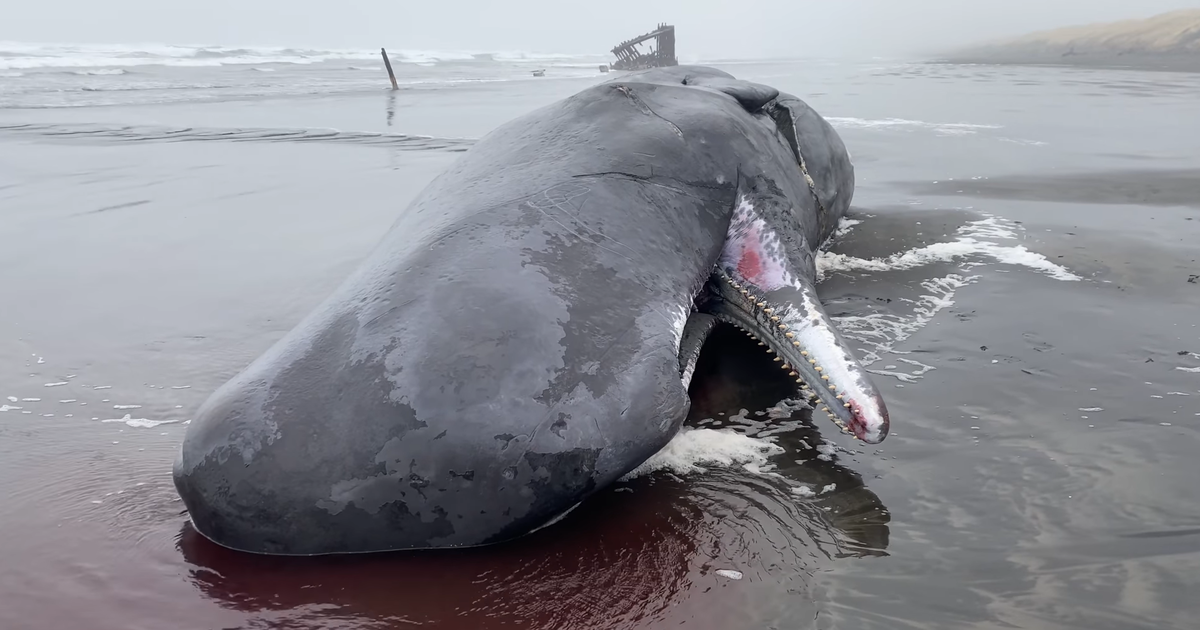 A 40-foot sperm whale was found dead along the Oregon coast Saturday after its body washed ashore on a stretch of beach at Fort Stevens State Park, authorities said.

The whale was found near the shipwreck of the park’s flagship, Peter Iredale, and belongs to an endangered species of marine mammal, Seaside Aquarium wrote in a statement. Facebook Post shared on Sunday. The aquarium also shared a short video on its social media page of the stranded sperm whale after it was discovered.

Several “large cuts” were found on the whale’s body, which are partially visible in the video and could have resulted from a collision with a ship, according to the aquarium.

“[H]However, it is not clear if this attack occurred before or after death,” the aquarium said in its Facebook post. “A necropsy will be scheduled later in the week to take a closer look at this.”

Officials with the National Oceanic and Atmospheric Administration can perform the necropsy as soon as Monday afternoon, Michael Milstein, a spokesman for the agency, told CBS News in an email. Milstein said the examination could reveal more details about the whale’s death and what caused it.

The aquarium publication noted that staff at Fort Stevens State Park removed the sperm whale’s lower jaw “so that the teeth would remain intact for scientific purposes,” adding that “the whale was believed to be a juvenile male.” Milstein told CBS News on Monday that a 40-foot sperm whale is “about the typical size” of an adult male.

The sperm whales are the largest toothed whales on Earth, according to NOAA, with males sometimes reaching almost 60 feet in length and weighing more than 40 tons. They typically feed on marine life found in deep water, such as squid, sharks, and other fish, and can live up to 60 years. The population of sperm whales off the west coast of the US is estimated to be around 2,000, Milstein said, but “they are less common up north in winter.”

“So the presence of the sperm whale this time of year is somewhat unusual, but we’ve had sperm whale strandings the previous winter,” Milstein explained, adding: “Sperm whales are the third most common species of whales to strand in Oregon, after gray whales and humpback whales”.

Although the exact size of the current global population of sperm whales is unknown, estimates suggest that there could be between 200,000 and 1 1/2 million of them inhabiting the world’s oceans, the Alaska Department of Fish and Game has reported. The whales are listed as depleted under the Marine Mammal Protection Act of 1972 and endangered under the Endangered Species Act of 1973, after nearly two centuries of commercial whaling practices that ” populations of sperm whales worldwide have declined significantly,” according to NOAA Fisheries.

The government agency notes that the sperm whale population is “probably increasing” since a moratorium on commercial fishing was imposed in 1986, but also “still recovering” as a species whose survival remains threatened for various reasons. According to NOAA Fisheries, which leads sperm whale conservation efforts, the species is vulnerable to boat strikes, entanglement in fishing gear, underwater noise pollution, which can hinder their ability to communicate, marine debris, oil spills, and other pollutants. as well as various consequences. of climate change.

Few incidents have been documented in which a marine vessel fatally struck a sperm whale, according to NOAA. However, from 2010 to 2014, the agency reported that 37 whales were injured in collisions with boats along the Atlantic coast of North America and in the Gulf of Mexico, with similar estimates along the Pacific coast. NOAA has called these reports “minimum estimates,” which “are likely low because the number of unreported deaths and serious injuries is unknown.” Additional studies have indicated that marine vessels pose a significant threat to whales and other marine life, with one published in 2017 suggesting that some 80 blue, fin, and humpback whales are struck along the west coast of the US each year.

Recently, several whales, including some endangered species, have been killed or injured in US waters. Earlier this month, a 4-year-old North Atlantic right whale, one of the rarest in the world, with only a few hundred remaining, was originally sighted on January 1. 8 by an aerial reconnaissance team from the Clearwater Marine Aquarium in Florida, heavily entangled in fishing gear. The whale was sighted again approximately 20 miles east of Rodanthe, North Carolina, with “several turns of line around the mouth and tail” and more lines behind it. NOAA said. The animal was “likely dead” after entangled fishing lines left it with “numerous wounds all over its body and whale lice on its head,” the agency said.

Almost at the same time, a 21 foot orca was found stranded and later died after washing up on shore near Daytona Beach in Florida, while another 32-foot whale washed up on the beach in Brigantine, New Jersey, after authorities said it was highly likely. struck and killed by a marine vesselreported CBS Philadelphia. Earlier, in mid-December, a humpback whale named Moon, widely known and loved by researchers who have studied it, was left with a broken spine and unable to use her tail after being struck by a ship while swimming from Canada to Hawaii. Experts said they believed the trip would be Moon’s “last trip” before her death.